When we visited Corma in 2004, the producer of the famous dried ‘Ganda’ hams had just implemented the traceability, production and inventory management modules of the ‘LISA’ ERP package. A lot has changed in the company since then: goat’s cheese making was added, a ham producer was taken over and Corma also started its own slicing department. But ‘LISA’ had no problem at all with these evolutions. On the contrary, this application from Claerhout Computer Engineering’ (CCE) actually enabled the group around Corma to keep its spectacular growth in sales and activities on the right track...

Corma grew from Roger Cornelis’s butcher’s shop in Wetteren, which grew in fame from 1954 with its own specific charcuterie. Because there was such high demand for his products, he started a meat products plant in Destelbergen in 1969, where he developed the famous ‘Ganda ham’ nine years later. Financial & Administrative Officer Gino Delabie: “When Roger Cornelis left the company to his son Dirk in 1989, Drik decided that Corma would only produce dried salted ham. And this strategic decision paid off, because the company grown steadily. Today we produce approximately 185,000 hams per year. In the meantime, a group of other companies was formed around Corma. Together, they represented sales of twenty million euros in 2009."

The choice falls on ‘LISA’

Its strong growth meant that Corma needed to start computerising its bookkeeping and sales activities in the early 1990s. But the ERP application that they chose could not be expanded to include production, storage or traceability. It was also unable to make the transition to 2000, and did not offer many options to manage the administration of different companies in parallel to each other. Gino Delabie: “That is why we decided to implement a new package in 1999. Our market analysis indicated that ‘LISA’ from CCE was the best solution. After all, this package makes it possible to keep the complete cycle, from raw material purchasing to sales, on the right track. It also offers good reporting options and permits analytical bookkeeping. But the deciding argument was that ‘LISA’ focuses specifically on the food industry.” 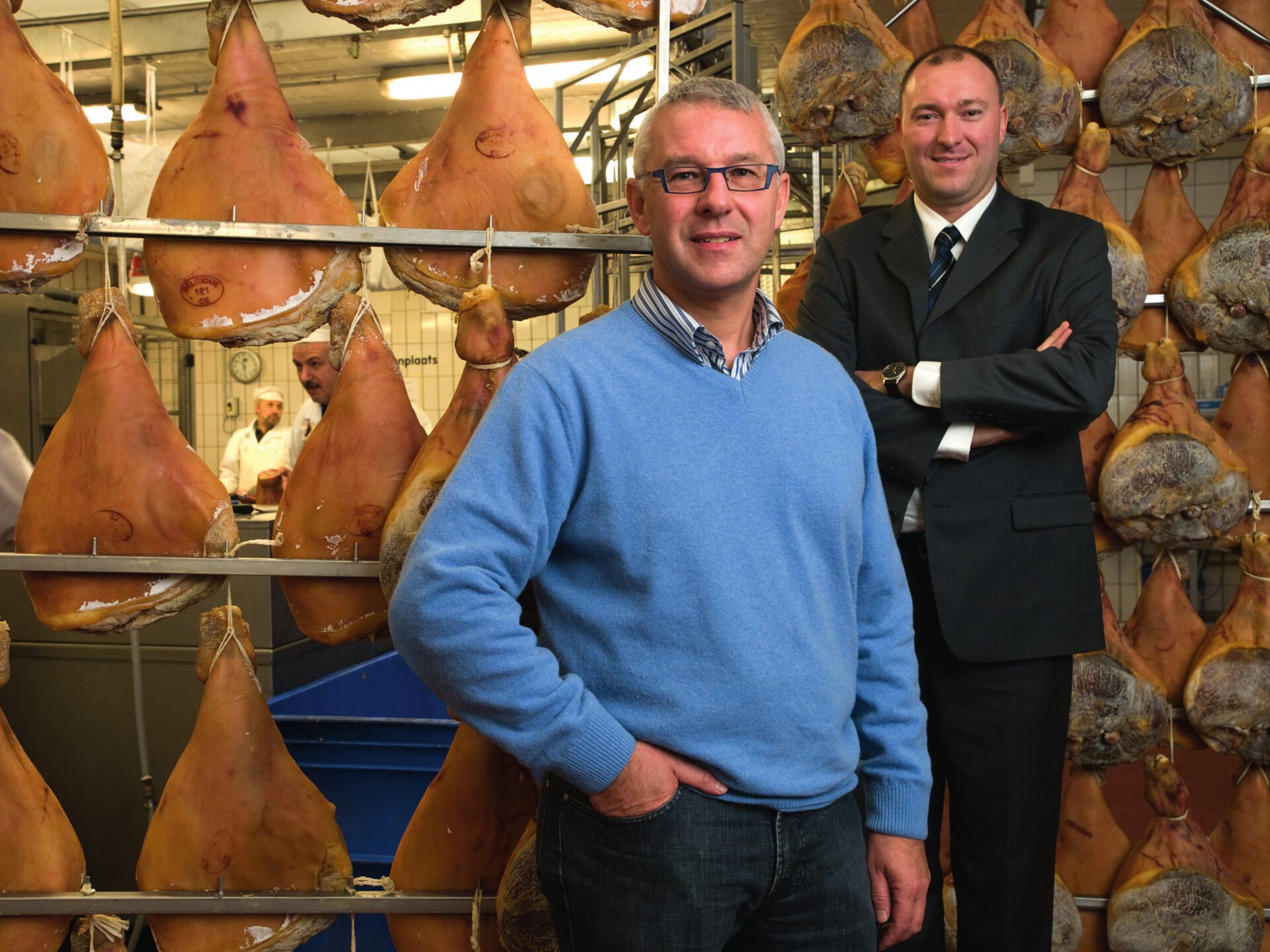 The contract was signed in mid 1999, and the purchasing and sales modules were operational by 1 January 2000. Gino Delabie: “Due to a lack of time, we waited until 2004 to start on the next phase of the project, namely the implementation of the tracing and production modules. But this also actually went very smoothly: the knowledge of the CCE employees and how they prepare such an implementation ensures that the application only has to deal with the typical cosmetic flaws at start-up.” Although this used almost all the functionality of ‘LISA’, CCE’s assignment with Corma was not finished by a long way, because in the following years the company diversified its activities, which went hand in hand with a considerable expansion and a need for ERP. For instance, Corma took over Le Larry in 2005, a traditional goat’s cheese maker that was started by Gino De Clercq in 1981. A year later, this activity was transferred to the Ganda site in Destelbergen, where the building (originally a banquet hall) was transformed into a brand new production facility next to the factory. Gino Delabie: “Once the move was accomplished, we started on the implementation of ‘LISA’ in Le Larry. We automated the entire cycle here too: from purchasing with quality registration upon receipt of goods, through sales and administration to production and inventory management.” Bart Van Beversluys, CCE Consultant: “Because Corma also sells Le Larry products to its customers, we have linked the ERP applications for both branches so that inter-company invoicing is possible. This eliminates a lot of administration work: ‘LISA’ automatically takes care of the invoices from Le Larry to Corma every month. Aside from this, the management decided in 2009 to start up a test project in the cheese maker, namely to draw up product specification sheets that are analogous to the documents that Fevia provides. For this, all the technical data on the raw materials and packaging were entered into the ERP system and extended to the level of the end products via the Bill of Materials.”

But before starting this test project, CCE needed to successfully complete another implementation first. Because in 2007, Corma decided to start up its own slicing activity. Gino Delabie: “This was done within First Selection Belgium, a sister company that previously only functioned as a trading company for export. Because this company already used ‘LISA’, CCE’s task was only to implement the production and inventory management modules, as well as the inter-company invoicing.” “That was indeed the beginning,” smiles Bart Van Beversluys. “Because ultimately, the slicing activity led to us needing to install another module from ‘LISA’ that was still unknown to Corma, namely EDI. After all, since last year Delhaize has been stocking its fresh products in a new integrated warehouse. But for this to work as cost effectively as possible, it has required its most important suppliers to deliver the foods in a completely different way. Per pallet – which must be provided with an SSCC label – and per bin – each of which has a unique fixed code (GRAI) – we need a statement of how much of what product is delivered with what lot and expiry date. Before a truck can leave for the depot, these data must be communicated to Delhaize electronically, after which the retailer sends a sort of access ticket with the time and loading bay. It is obvious that this work flow does require some modifications to the ERP system. But fortunately we foresaw this trend with ‘LISA’, and developed the EDI module in good time. Concretely, at the moment that the products are placed in the bin, the bar code of the bin is scanned, after which ‘LISA’ generates a pallet sticker for a full pallet with all the necessary data. At the same time, the ERP package automatically forwards these data to Delhaize and they print off the waybill as soon as they receive the access sticker from the retailer.” Gino Delabie continues: “At the moment, only Corma must meet these requirements, but Le Larry has now also been asked to organise its logistics this way. That is why CCE is ready to integrate the EDI module there as well. In fact, we think that all the retailers will follow this trend, meaning that Vleeswaren Hoste will also have to follow.”

Because Corma also sells Le Larry products to its customers, we have linked the ERP applications for both branches so that inter-company invoicing is possible.

And with this we come to another task that CCE performed at the Corma group: the implementation of ‘LISA’ at Vleeswaren Hoste, a ham producer from Maldegem that was acquired in 2007. Bart Van Beversluys: “At the beginning of this year, we started with the sales and invoicing modules. We have been working on automating purchasing, production, tracing and inventory management since April. The intercompany invoicing is not needed yet because Vleeswaren Hoste is physically removed from Corma. This means that in any case an official transport document needs to be made for goods that are transported to Destelbergen to be sold by Corma later.”

The next project that CCE must realise at Corma is the integration of ‘LISA’ with the new weighing line that is currently being installed in the shipping department. Gino Delabie: “Aside from that, we want to implement the document management system. This archives each document that is generated by the ERP system on the server. It can then be displayed with the press of a button.” Bart Van Beversluys: “Furthermore, the archiving is linked to Microsoft SharePoint: an intranet application that makes it possible to call up all kinds of information, such as a delivery slip based on a lot number. The plan is actually also that in the future, the Corma group will also scan in its purchase invoices to enter them into the document management system via an OCR application. It this way, no documents will ever be lost again and the ham producer can achieve a real ‘paperless office’.”

You notice: ‘LISA’ is really a package that grows together with its time and users. And the partnership that Claerhout Computer Engineering strives for with its customers, is not an empty concept. Gino Delabie: “With CCE, you don’t just get an in-house ERP supplier, you get a specialist for processes within the food industry. They have often helped us in the optimisation of our workflows. Furthermore, CCE is prepared to get to know its users’ company through and through. In this way, they are not only able to come up with an appropriate answer to new needs and requirements quickly, they sometimes also detect obstacles for which ‘LISA’ can provide a solution. I must admit that we rarely see that a supplier is so involved in the work that its customers do. However, it has now become clear that this approach pays off. Because aside from us, many other food producers in Belgium are very satisfied ‘LISA’ users!”