A successful partnership - Ten years of ‘LISA’ at Delino

Interaction with the customer is central at Claerhout Computer Engineering. All user input is analysed carefully and, if usable, incorporated in the ‘LISA’ ERP package. That way the standard application continues to evolve and it constantly anticipates new trends and needs specific to the food industry. One of the customers that plays a leading part in this story is Delino. This sauce manufacturer has understood CCE’s strategy very well: they have been a critical user since 2000 and provide continuous input. All parties involved have reaped the benefits… 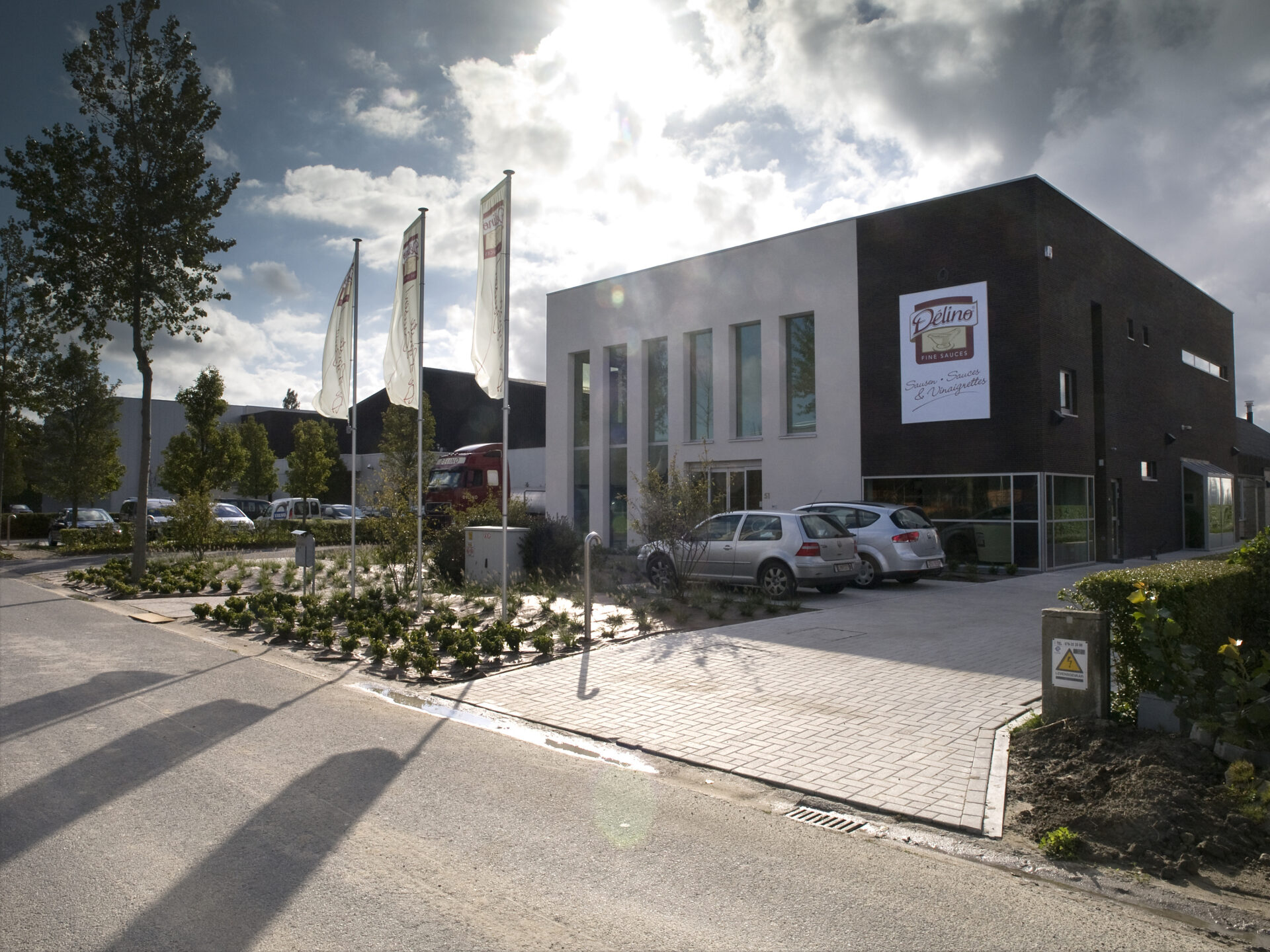 At the end of the 1960s, butchers Guido Denys and Marleen Dejaegher decided to concentrate on the production of sauces. Daughter Evelyn Denys: “The reason for this was rather insignificant: a customer had mentioned that the americain préparé (raw prepared minced beef) did not always taste the same and my father wanted to do something about that. He started making his own sauce for this product. Shortly thereafter he started making mayonnaises and tomato sauces, which he sold to other butchers.” Because the production of sauces became an increasingly larger part of his business, a separate building was quickly purchased. However, the strong growth in demand for these products quickly rendered this building too small. Evelyn Denys: “Since my parents saw a lot of potential in this activity they decided to sell their butcher’s shop in 1986 and concentrate on the production of sauces. They bought land in the industrial estate ’t Walletje in Knokke-Heist and built a production facility.” Delino quickly conquered the market of butchers, caterers, restaurants, industrial kitchens and industrial customers. Unfortunately, Guido Denys was not able to enjoy the success of his enterprise for long; he died in 1996. The family did not throw in the towel. Despite their young age, daughters Stefanie and Evelyn decided to assume control of the company. They did so in an impressive manner. Since then Delino has grown into a leading sauce producer. The company offers about 150 cold and hot sauces, as well as vinaigrettes, that are offered to customers in packages ranging from 300 ml to 1000 litre containers. Depending on the season, the company employs 25 to 30 people. The site has been expanded three times and is now 12,000m².

Searching for the perfect ERP supplier

Having grown up in the computer era it is logical that the young managers quickly chose to computerise the business. Evelyn Denys: “At the end of the 1990s we worked in a DOS environment that was very limited with regard to reports. To steer our business in the right direction, we needed to gain insight into the ordering and payment behaviour of our customers. That is why we decided to invest in a real ERP package.” Delino did not want to chose just anyone and spent a lot of time looking for the perfect application and supplier. “The implementation of such a solution has far-reaching consequences on a financial and operational level,” explains Evelyn Denys. “That’s why we looked for a package that anticipated our needs perfectly and that could grow with the business. We also wanted a supplier that was solid enough to guarantee a partnership for many years. After consulting with diverse food producers, we found various ERP suppliers. We quickly realised that CCE was the right partner for us. This company was solid and well-structured, even back then it had very adequate employees with a good share of knowhow about ERP in the food industry, and Geert Claerhout employed a philosophy that we liked: no-nonsense and the pursuit of an intense interaction between supplier and user. ‘LISA’ was also very appealing. It was specifically tuned to the typical traits of the food industry, could be implemented modularly, was very user-friendly and offered lots of reports. We didn’t hesitate long before making ‘LISA’ the beating heart of Delino.”

We started the first phase of the implementation in 2000. Jan Claerhout, project leader/consultant CCE: “Because Delino mainly strived for a centralisation of its administration, we advised them to start with the accounting and sales modules. That way the sauce producer received an invoice per order form with the click of a button. Then we implemented the purchasing module so that Delino had a better view of its costs and could do the required quality controls of the recipes via ‘LISA’. The next step was the cost price calculation module. Up until then the data had been exported from ‘LISA’ into a different system. This was time consuming and resulted in errors. Now Delino always has correct and up-to-date cost prices, which is very important in times of changing raw material and energy prices. Then the stock module was started up. Directly afterwards the registration and follow-up of empty containers was started up. Finally, at the beginning of this year we started implementing the production module.” Evelyn Denys: “Our turnover has doubled since 1996 and the product range has quadrupled. This means that our planning has become more difficult. The system that we used could not keep up with the growth. We also wanted to be less dependent on our employees, because a lot of knowledge about production planning rests with a few employees. It is a disaster when they are sick. It seemed obvious to use ‘LISA’ for this activity.” Once the production module is fully operational, the circle will be further closed with the traceability of all production steps (this currently takes place on paper). We also intend to introduce scanners in dispatching.

The orders come in and are encoded in ‘LISA’. The ERP package automatically checks whether there is enough product in stock. If that is the case then a picking slip is printed immediately. Otherwise the ERP package calculates a work order proposal in the production planning (occurs weekly). When the batches are ready, office employees enter into ‘LISA’ exactly what was produced. Then the application generates the picking slips automatically and updates the stocks. Once the orders are ready, they are entered into the ERP package and the invoice and required transport documents are printed.

When the batches are ready, office employees enter into ‘LISA’ exactly what was produced. Then the application generates the picking slips automatically and updates the stocks.

Despite the fact that Delino is a very critical customer, the two managers are extremely satisfied with the system and the supplier. “We cannot say that everything always ran smoothly,” says Evelyn Denys. “The first phase cannot be underestimated because so many things need to be parameterised. The package also has implications on the way you work and you have to learn to use the application. CCE takes care of all the problems and questions and we were able to use ‘LISA’ very quickly. The fact that the package can be built modularly is a real plus. It allows users to get used to the new functionality step by step. In any case, we would be lost without ‘LISA’ and think that the investment in such a solution is more than justified. The integration has resulted in major time savings; there are fewer errors and the ERP application offers lots of reports. In my opinion, the reports are invaluable because you get a perfect overview of sales and purchases, which allows us to negotiate better. You can calculate your return and intervene on time. ‘LISA’ contains a far-reaching system for awarding promotions and discounts in different ways, which gains time and keeps customers satisfied. The history of supplier price evolutions is important to me because I can make simulations for the future. Another plus is the ‘bill of materials’ that allows us to hide or make certain information visible to certain parties.” Delino is not only satisfied with ‘LISA’, Evelyn Denys also speaks highly of the collaboration with CCE. “What I find very positive is that you always have one contact person. This person gets to know the company so well that half a word is enough to understand our needs. As we get to know the package better, a very interesting interaction has developed. We are a critical user that takes the initiative to formulate proposals to CCE for expanding the functionality of the standard package. We often know that it will not be possible to execute the adaptation right away, but experience has taught us that they really do listen to us. In a subsequent release we often find lots of extra functionality that allows us to work more efficiently. I experience this as a real partnership: by giving each other input, we are both able to grow…”