Small businesses that grow often face the problem that their IT tools are not able to keep up with the growth. De Hobbit was confronted with this problem last year. However, the vegetarian food producer immediately jumped into action and started looking for an all-encompassing ERP system. Pretty soon the choice fell on “LISA” by Claerhout Computer Engineering. “The orientation towards the food industry and extensive functionality and ease of use was not available in any other ERP package,” says Production Manager Thomas Van de Vijver.

Eric Dewilde, the avid nature lover, decided to convince the world to eat vegetarian in 1983. He started De Hobbit, a small company with which he started producing the meat substitutes tempeh and seitan. Although the activity remained fairly small-scale, entrepreneur Frederik Dossche saw potential in the company. So in 1999, he decided to take over De Hobbit and expand. Sales and Finance Manager Edith Gomes: “He bought a production space in the Maldegem industrial estate and invested in decent equipment. Two years later, he decided to integrate Food For Freedom into De Hobbit, a small company that specialised in the production of tofu and macrobiotic foods. This strategic move included a requirement for a second production hall. After all, the tofu manufacturing process is completely different from that of tempeh and seitan. Coincidentally, our neighbours' establishment was put up for sale in 2003, which was fortunate. It was an opportunity that Frederik seized with both hands. Pretty soon after that, we divested the macrobiotic branch to focus on the three most important meat substitutes for vegetarians. In the meantime, we have added some innovations, including lupine and hemp-based tofu.” Today, the De Hobbit range has about fifty recipes. With thirty full-time equivalents, the company manufactures about 720 tons of product every year, half of which is exported to health food stores in the Netherlands, Germany, France, Spain and the United Kingdom. “We are mainly active in health food stores in Belgium too,” says Thomas Van de Vijver. “This channel accounts for about 35% of turnover. We get 15% of our turnover from retail sales, and the rest we generate through sales to other food producers who use our products as raw materials.” 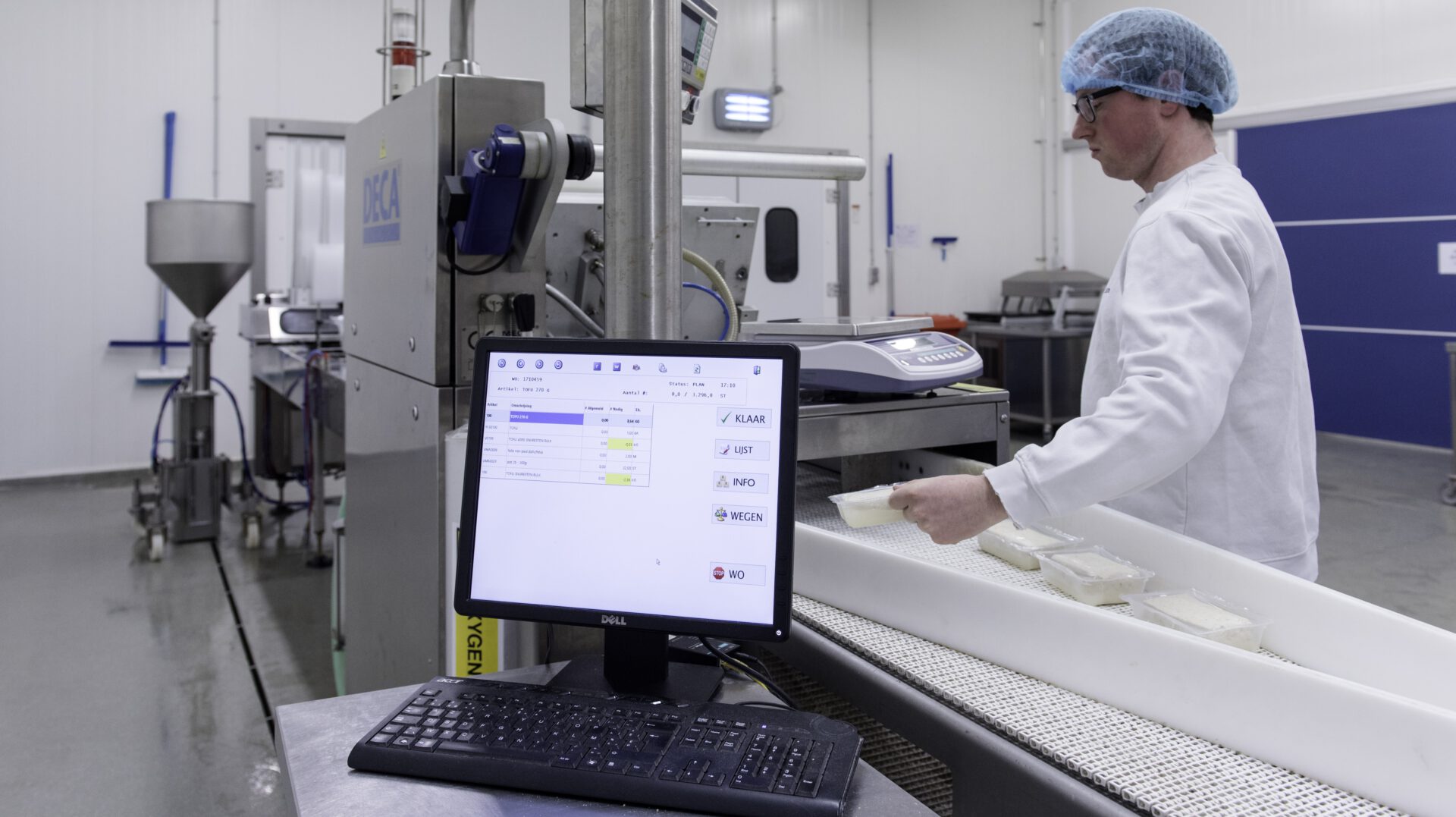 Time for a real ERP application

Last year, De Hobbit achieved annual average growth of approximately 10%. “In recent years things have gone very fast,” says Edith Gomes. “So many investments have been required that we have had to make choices. Although we had known for some time that we actually needed a full ERP package, the plan was always postponed for budgetary reasons. Last year, however, we realised that procrastination was no longer an option. First and foremost, there was an increasing demand for EDI. In addition, more and more customers demanded electronic tracking. And last but not least, our invoicing and accounting package was so slow and unreliable that it really couldn’t go any further."

“LISA” convinces us with its testimonials

It turned out that trying to upgrade the existing application was not going to be an option. After all, De Hobbit used a combination of a Microsoft Access-based solution that was developed in-house and a Kluwer package that was no longer supported. “We decided to start from scratch and implement a completely new, comprehensive ERP package,” says Thomas Van de Vijver. “After carrying out a thorough market analysis, we drew up a shortlist of four providers, which included Claerhout Computer Engineering. They then carried out an analysis and made a proposal for an application. On that basis, only 2 remained, ‘LISA’ from CCE and another package. To make the right choice, I called and visited users of both packages. The story of Culinor and Hot Cuisine in particular piqued my interest. When these two companies merged, they needed to choose which ERP package to keep: LISA or SAP. The decision fell on CCE’s ERP solution, which is quite significant. The users of the other references also praised both the package and CCE itself. Edith Gomes continues: “So we were already convinced to choose ‘LISA’. Still, it’s only after we got a full demo from CCE that the penny finally dropped. The experts used understandable language to explain, for four hours, how ‘LISA’ works and what we could expect from it. But also what was expected of us. And it was no small amount required from us: after all, an incredible amount of time is invested in the preparation, the input of the data, and the management of the master data. You have to bite the bullet as a company and then achieve a good result. However, the reference stories show that this effort pays off in the long run. We haven’t noticed it yet because we’ve only been working with ‘LISA’ for a few months. The effect this ERP package will have on De Hobbit cannot yet be estimated. But it is clear already that it will have a positive effect.”

From preparation to start-up

CCE conducted a thorough analysis of De Hobbit’s work processes in April. The hardware (scanners, scales, printers, servers, PCs, etc.) were also examined. Thomas Van de Vijver: “The analysis showed us that we only needed to renew the server and printers, which kept the total investment within limits. We then started inputting articles, customers, recipes, etc. Working with CCE, we decided to do this manually: it was certainly the best way to clean everything up properly and to get to know the ERP package in a fairly intensive way.” Bernard Van Praet, Consultant at CCE: “At the same time, we started the parameterisation of ‘LISA’ and the training of key users. De Hobbit went through a fairly normal process in terms of implementation: first the accounting module, then purchase and sales with EDI, and then production, recipes, item management and tracing. On 3 January, we were ready for the start-up, which traditionally takes a bit of trial and error. After all, there will always be things that need to be optimised or refined. But thanks to our successful preparation and intense co-operation with the customer, we managed to get the ERP package completely stable by 15 January.” “It was a very exciting two weeks, I must admit,” says Thomas Van de Vijver. “Nevertheless, we are very satisfied with CCE’s performance. We may have had several sleepless nights during the start-up phase, and our hair may now be a little greyer, but thankfully our customers have not noticed the switch to ‘LISA’. All the deliveries were complete and on time, and included the necessary documents. A sign for us that CCE really knows what it is doing.” Get to grips with functionality first. According to De Hobbit, it is still too early for a thorough evaluation of the ERP package. “Although ‘LISA’ has been designed intuitively, it does take a while to get the hang of everything,” says Edith Gomes. “This also has to do with the fact that some of our work processes have been geared to the ERP application. This was a conscious choice because we are convinced this will benefit us in the future. In theory, ‘LISA’ should also reduce the administrative workload. However, it is still too early to judge whether this will actually be the case in practice.” Thomas Vandevijver: “I do notice progress in production. There are fewer error messages, conclusive tracing, fewer entries to be made on the PC, the control and planning of production is faster and smoother, etc.”

The feeling the CCE consultants have for the food industry was clear to see throughout the entire process, which gave us extra confidence.

Already working on the next steps

Opinions are unequivocally positive about CCE as a supplier of the ERP package. “I thought we were going to get some geeks who would be totally ignorant of communication,” says Edith Gomes. “To our great surprise, rather the opposite was true. Claerhout Computer Engineering’s consultants are all pleasant, calm people who empathise with your company and can explain everything in a language we understand.” Thomas Van de Vijver: “Their feeling for the food industry was plain to see throughout the entire process, giving us additional confidence and motivating us to put in the time and work required for the preparation. In the meantime, I am sure ‘LISA’ will become the beating heart of our organisation, the engine that will perpetuate our growth. This is why we are already thinking about the next steps we want to take with the ERP application. For example, the purchasing module has already been expanded, and we intend to eventually let the operators themselves enter the lot numbers of the ingredients they use. We also want to automate the entire process and administration of a specific customer’s fresh produce department. Finally, we want to expand the EDI process further because the demand for this functionality is increasing strongly. And who knows what else we will discover; ‘LISA’ is an application with so many possibilities; you can only discover a large part of the potential for your company once you have fully mastered the ERP application.”